In the 1970s, colour and cosiness in the interior was the most important thing. A macramé reading basket and a macramé plant hanger was almost a must. A lot of the interior style of the Seventies has made a comeback! While I surf the internet for this blog, I get caught up in those seventies. I’m going to do something with that, too. 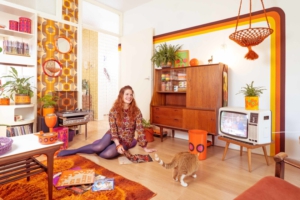 After this period, macramé was mainly for women in large purple robes with a beaded necklace and on sandals. I’m not saying that, it was just in the corner of creabea, swaggering types and some more alternative freethinkers. Nothing wrong with that, but it just wasn’t hot and happening.

Now it’s been totally hip for quite some time. Well-dressed hipsters, flowerpower girls and cool healthchicks, they’re all macramee. And gee! I see beautiful things passing by. Wall hangers, curtains, accessories and not to mention plant hangers. My hands started to itch.

Since I already have more hobbies than I can handle, I assumed I wouldn’t get started on this. For a few years, I bravely persevered. Until I saw a beautiful curtain pass by which would fit exactly between the gate of front and back garden. Just check YouTube to see if it’s doable. 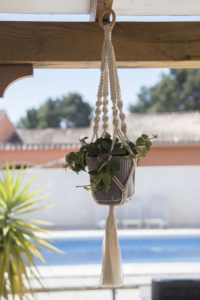 This time I was trying to be more sensible than I normally am. That doesn’t mean starting that curtain right away, but first something smaller. That became the old familiar plant hanger. Well, so it’s a piece of cake. And very nice to do! Ordered cord right away. It arrived the next day.

The rest is history. The curtain is ready and I can’t wait to start the next project!

For ordering cord in Spain I can really recommend this website, the delivery is super fast! https://www.lastijerasmagicas.com/es/ 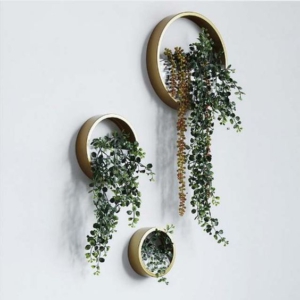